In English-speaking countries, they interpret for people who come before the courts who cannot communicate effectively in English. These include defendants and witnesses in criminal courts as well as litigants and witnesses in family and civil courts. Interpreters also work in out-of-court settings such as attorney-client meetings, depositions, witness preparation sessions, and interviews with court support personnel (e.g., probation). 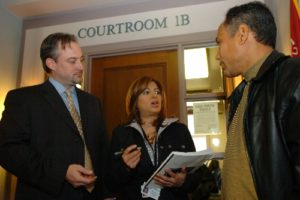 What do court interpreters do?

The interpreter’s job is to interpret (translate orally) from one language to another everything that is said, preserving the tone and level of the original language, adding and deleting nothing.

Interpretation is usually in one of two modes, depending on the circumstances: simultaneous or consecutive. Trained interpreters use the same grammatical person as the speaker for whom they are interpreting.

A subjective question. The ability to interpret simultaneously is not necessarily difficult to acquire. On the other hand, there are no more than a few thousand accomplished simultaneous interpreters in the world (judging from numbers of members in professional associations, the difficulty in finding good interpreters in rarely used languages, and the failure rate on interpreter examinations). This fact suggests that simultaneous interpretation is not an easy task. The difficulty in any given situation depends on the conditions: the nature, complexity and speed of the speech, diction, acoustics, the interpreter’s ability and familiarity with the material, etc.

What does it take to become a competent court interpreter?

Native-like mastery of both the language of the court and a second language; a wide general knowledge (characteristic of a person with at least two years of college-level education); an extensive vocabulary ranging from formal legal language to colloquialisms and slang; mental and verbal agility; the ability to deal with lawyers, court personnel, the public, etc.; an understanding of the terminology and procedures used in court; and at least some training and experience.

What is the difference between interpretation and translation?

Translation normally refers to written materials, i.e, going from one written medium to another. Interpretation is spontaneous oral translation, from spoken word to spoken word. Sometimes the term translation is used to mean either one.

There are hybrid situations: when you read a text in one language while reciting it aloud in another, you are said to be sight-translating. Court interpreters often sight-translate legal documents like plea agreements.

When you listen to a tape recorded conversation in one language, write down what you hear, then translate it, you are transcribing and translating (known in the trade as doing tapes). Taping conversations is a frequently used investigative technique. U.S law enforcement agencies and prosecuting authorities often call on translators to transcribe and translate those conversations when they are in a language other than English.

What languages are most frequently used?

By far the most often used language in the U.S. is Spanish, but the courts require dozens of other languages as well. Frequency of use of a given language in a given area naturally varies in proportion to the population that speaks that language. In population centers like New York City, interpreters of perhaps a dozen different languages are needed daily. In the federal court in Manhattan, where this writer works, Spanish accounts for about 70% of our case load. The remaining 30% is dominated by Asian languages, particularly Cantonese, Mandarin, and Foozhou. In total we use interpreters of about fifteen to twenty different languages per month.

The collection and reporting of reliable statistics regarding interpreter usage is essential to the management of court interpreting services. Unfortunately, it is also a huge problem, because methods of defining and counting interpreter cases vary from court to court, and in some instances the record-keeping is sloppy or nonexistent.

Is there such a thing as certification for court interpreters?

That depends on where you are. The purpose of certification exams is to test practical interpreting ability to determine whether it meets a certain minimum standard. In the U.S. District Courts, for example, there is what is known as federal certification pursuant to Title 28 USC §1827, the Court Interpreters Act of 1978. So far there are federal certification programs for Spanish, Haitian Creole and Navajo. In the states the situation varies widely. Some states (e.g., Washington, California, New Jersey) test interpreters of several languages. Many states have no certification at all. Some are trying. The National Center for State Courts has organized a consortium of states that is sharing resources for establishing standards and testing. Approximately 39 state and local court systems have joined the Consortium.

The value of interpreter certification, moreover, depends on the validity of the testing methodology and other certification requirements. Some states use court interpreter examinations that are of dubious validity. Also, some translation and interpreting agencies advertise that the interpreters they subcontract are “certified,” simply because the agency says so. If you are hiring a translator or interpreter who claims to be certified, ask her/him “certified as what and by whom?” Federal certification is usually a good indicator of competence. State certification may or may not be a reliable indicator, depending on the state in question. It is a good sign if a translator you are considering is accredited by the American Translators Association in the appropriate language combination.

Reliable certification is one of the most important issues of the day.

Where can I find out about federal certification?

The only languages for which there is federal court certification are Haitian Creole, Navajo and Spanish.

What if an interpreter doesn’t know how to translate a word or phrase?

In proceedings longer than about half an hour, it is necessary for interpreters to work in teams of two, not only to relieve one another periodically so as to avoid fatigue, but also to provide mutual assistance with these sorts of problems.

In a perfect world, interpreters are fully trained and prepared for the material they interpret, the acoustics are ideal, and the speakers are considerate.

What happens if an interpreter makes a mistake?

Not if, but when, because interpreters are human, and humans are not infallible. Interpreters are ethically obligated to correct their mistakes immediately — assuming they are aware of the mistake. If not, it is up to someone else to bring the error to the court’s attention. There are complex and sensitive issues of protocol involved. Poor interpretation has indeed caused injustices; that is why standards, training and certification are so vitally important.

Is there a Code of Ethics that court interpreters and translators must follow?

In most jurisdictions where interpreters are used with any regularity, courts have promulgated codes of ethical conduct for court interpreters and translators. NAJIT has this Code of Ethics and Professional Responsibilities which is binding on all its members.

Is there a statutory or constitutional right to an interpreter?

Although the United States Consitution does not explicitly provide for the right to an interpreter, the individual rights and liberties afforded to all individuals under the Fourth, Fifth, Sixth, Eighth and Fourteenth Amendments are meaningless for non- or limited-English speakers unless they are provided with adequate interpreting services. United States ex rel Negrón (1970) is among the most important cases that stand for that proposition. In Negrón, a Spanish-speaking defendant’s murder conviction was overturned on constitutional grounds. Negrón was provided only periodic summaries during breaks, rather than an ongoing interpretation of the proceedings. His comprehension during the proceedings was therefore essentially nil, in violation of his due process rights.

A few states have statutes that provide for the right to an interpreter; at the federal level there is the Court Interpreters Act of 1978.

Have cases ever been successfully appealed because of interpreter issues?

Yes, but rarely. For a thorough discussion of interpreter-related case law in the United States, please see V. Benmaman, Interpreter Issues on Appeal in our Proteus archives.

How do you study to become a court interpreter?

A few colleges and universities in the U.S. offer minors or certificates in court interpreting, and/or in interpreting or translation generally. There are occasional short-term seminars and workshops around the country. A good way to keep abreast of course offerings is to join NAJIT as well as your local translator & interpreter organization so that you will receive newsletters.

One indispensable self-training technique is to go to court and observe the proceedings. Mentally translate to yourself. Can you do it? Write down the terms that stump you, then look for solutions in dictionaries.

That depends on which court, and on your perspective. In some parts of the United States the pay is dismal; in others it is more reasonable. As of January 2000, the federal courts pay $305 per day to per diem interpreters (Before that, the per diem rate had remained at $250/day for nine years.) When interpreters are hired by private parties, the rate of remuneration is negotiable.

Most court interpreters are freelancers (self-employed) and considered independent contractors. Where the volume of work is greatest, the courts tend to have full-time staff positions, almost all of them for Spanish-English. Starting staff interpreter annual salaries may range from around $30,000 up to around $80,000. Freelance interpreters and translators can earn over $100,000 per year, but generally not without working long hours. These are rough figures at best, and to this writer’s knowledge, no systematic compensation survey has ever been done in this field.

What kinds of cases do court interpreters typically do?

Interpreters cover virtually every kind of case in the municipal, state and federal courts. State court interpreters cover matters ranging from personal injury cases to small claims to landlord/tenant disputes to domestic violence to child support to sexual assault to drug offenses to arson to illegal gambling, to name a few. Drug cases form a large part of the state interpreter case load; in the federal courts drug cases are the rule.

Is the work interesting?

Some types of proceedings are formulaic and predictable, and can be dull. Sometimes the work is thoroughly fascinating, exciting, dramatic, challenging, stimulating, and fun. Not infrequently it is exhausting and stressful (imagine interpreting at the war crimes tribunal in Bosnia, or at the O.J. trial). But if you ask around, you will undoubtedly find that most interpreters will tell you they enjoy their work.